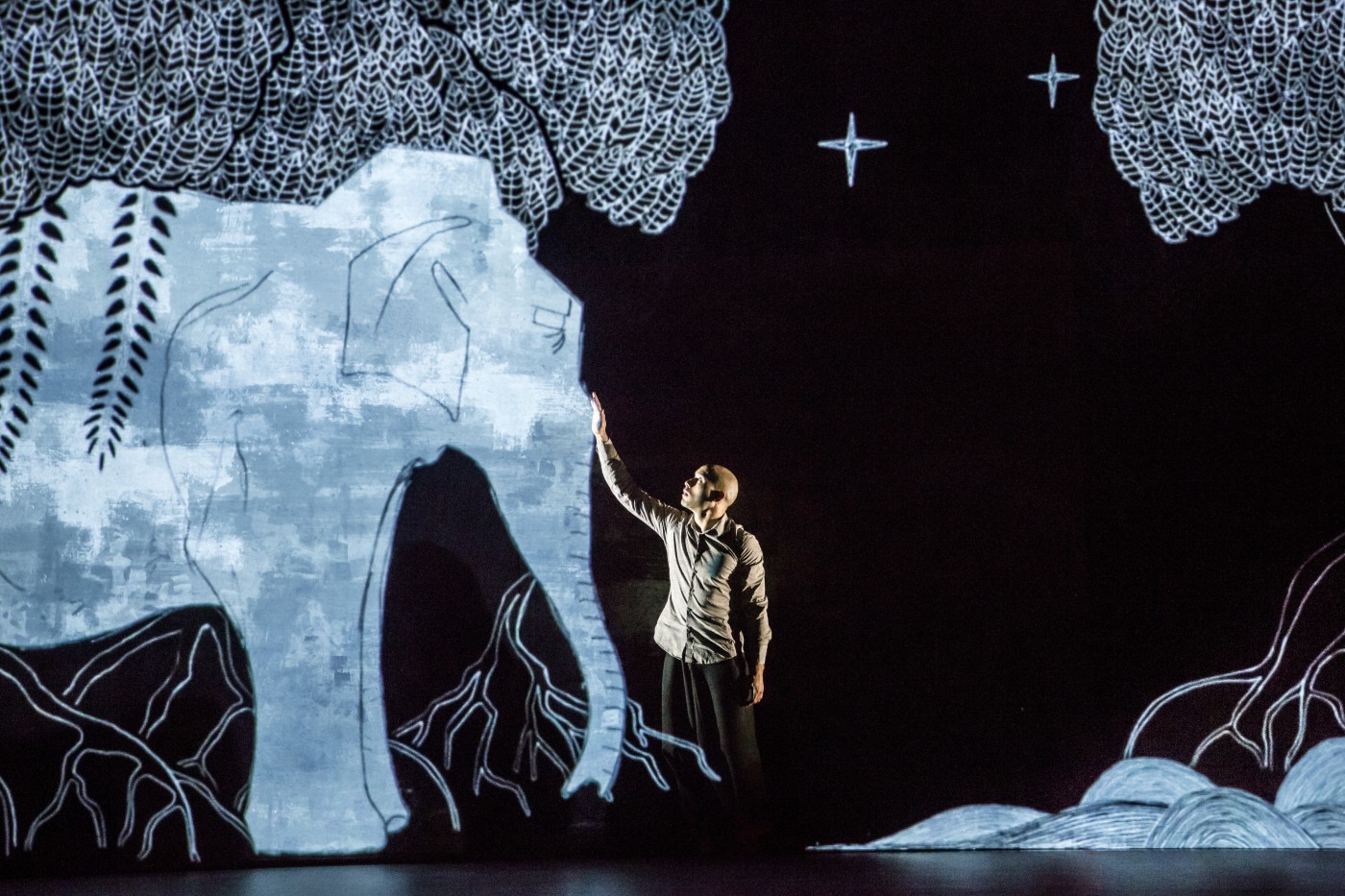 It was the 9 p.m. Saturday show, the first weekend of the 2018 Fluid Festival, and they couldn’t start at 9 p.m., because people kept arriving, until the DJD Dance Theatre was close to full.

There had already been a large crowd at the 7 p.m. performance, which featured new works by Pamela Tzeng and Mark Kunji Ikeda, and prior to that, afternoon sessions sponsored by the Asian Heritage Foundation, and Asian street food — so it had been a hectic, busy day.

That night featured a trio of performances, choreographed by Wen Wei, Yukichi Hattori, and Lesley Telford, which explored themes of identity, oppression, community, alienation — and a few others as well.

Reverence, Hattori’s piece, inspired by Mark Sakamoto’s novel Forgiveness, called back to the internment of Japanese-Canadians during the Second World War.

It was quiet, as Hattori performed Reverence in a tiny, confined cubicle that I imagined represented being confined by a government dictate.

Somehow, Hattori managed to turn the oppression of that confined space into a creative zone, as if to send out a message to oppressors everywhere: you might be able to take away my physical freedom, but you can’t take away my imagination.

The 2018 Fluid Festival unfolded over three different weekends, with an added 2018 bonus arriving in mid-November: a performance of Chotto Desh, by London choreographer Akram Khan, at the Taylor Performing Arts Centre at Mount Royal University.

That show, about a young Bengali boy coming of age as a dancer in London, was an all-ages show that combined text, dance, music, and animation in a way that was exhilarating to experience — for me as well as for the hundred or so school kids from across the city who caught the 10 a.m. performance one Friday morning at the beautiful Bella Concert Hall.

It was a show that connected to kids, but also shared themes and experience and perspective with a range of performances presented by the Fluid Festival in 2018, including not only that batch of first week performances by Wei, Hattori, Ikeda, Tzeng and Telford, but also in High Trails, a new performance created by Making Treaty 7 artistic director Justin Many Fingers and then again, on the festival’s closing night in Study for Anima/Darkroom by Lucy M. May (performed by Vladimir ‘7 Starr’ Laurore).

Namely, it was all about decolonizing dance.

That Saturday lineup of Hattori, Telford and Wen Wei explored the tension between contemporary and classical dance on the surface, but under the surface, the entire month-long dance festival also took a deeper dive into exploring the tension between the historical white gaze of contemporary performing arts and answering the question of now: how to fit the mixed, hybrid experience of multiculturalism into them in a way that feels organic, dynamic and original?

All of which is a pretty tall order!

“I’m glad you see that,” said Fluid Festival artistic producer Nicole Mion, in a phone interview just prior to the opening of Chotto Desh.

“It’s certainly been on my mind and at Springboard,” she added, before answering the question — perhaps fittingly — with more questions.

“How do you really make space?” she asked.

“What are those stories that transcend, and connect for everyone?

“What does that mean? How do you still hold onto your idiosyncratic, very specific (vision and experience)?”

Judging by the diverse, quirky, funny and occasionally furious creations she programmed at this year’s Fluid Festival — many of them created by Calgarians trained and nurtured by this city’s dance scene — the answer is to lean in and gaze right back with bold dance strokes.

Or, to put it another way, here’s Tzeng, talking about the collision between her creative choreographic process and her internalized thought process that resulted in That ch*nk in y/our armour.

“I look at things through a white lens,” she says.

“I was born and raised here (in Calgary).

“I am conditioned to see everything with whiteness (as the dominant perspective),” she says, “and that was really hard to acknowledge: the whiteness that I’ve internalized. And the stereotypes I’ve internalized (through things like David Bowie and Iggy Pop’s China Girl video, which gets explored in That ch*nk) — and (learn to) play with (them).”

Fluid Festival 2018 represented the voices and visions of every quadrant of Calgary and it did it boldly and beautifully.

“When something is universal, it’s also specific.

“And I think this work, we’re trying to do at this festival is how do you support those works that are super specific but those ones that somehow transcend that, and by being super specific, somehow connect with everyone?”

Can you dance to Dylan?

There were other questions being asked over the course of the Fluid Festival. There was the question of whether you can dance to Bob Dylan, asked by Belgium’s Lisbeth Gruwez, in a highly unlikely jukebox dance piece that felt like Saturday night in some suburban Belgian rec room, circa 1973. (Answer:  an emphatic yes!)

There was the question of whether C Space is a manufactured creative environment, or whether by throwing together a bunch of disparate art organizations, it generates creative sparks, which Fluid Festival and Swallow-a-Bicycle attempted to bottle with a weekend in-house party that coincided with a wild wine and cheese party thrown by Alliance Francaise on the fourth floor of King Edward School. (Answer: yes!)

In the throwdown between contemporary and classical dance, the winner was unquestionable: audiences.

Lastly, will a dance festival that asks smart questions and challenges audiences and presents performers from around the world find an audience in recession-ravaged Calgary in 2018?

“I feel the community embracing the festival more. There are more partners, there is more energy, (and) people wanting to stick around at parties,” Mion said.

“We’ve always known that Calgary’s a festival town, and I really feel the Fluid Festival is being embraced –and that’s nice.”

Stephen Hunt was the 2018 Fluid Festival Writer-in-Residence. He donated 100% of his fee to Springboard Performance.