You can talk your reconciliation, or you can walk it.

That might be reductive, but it’s also the message Fred Leone wants audiences to take away from dirtsong, a multi-media collaboration between an intriguing collection of Australian artists that rolls into Jack Singer Hall Thursday night.

The show figures to close out the 2017 High Performance Rodeo Thursday night – the biggest, and some say best ever – on a high note.

Leone, a hip hop artist who is one of the singers in dirtsong, knows that Canada is searching more vigorously than we ever have for a route to reconciliation with our indigenous communities – and while Black Arm Band, the name given to the affiliation of singers, musicians and performers who perform dirtsong (in 11 different aboriginal languages) aren’t particularly aligned with Australia’s reconciliation movement, the reality is they are a sparkling embodiment of it.

“The show (is a form of reconciliation) itself,” Leone says, “it’s a whole bunch of indigenous and non-indigenous artists coming together (to perform).

“We never really talk about it as such,” he adds, “but I think actions speak louder than words, so we are able to show our country – in particular – hey: you can talk the talk, or you can just walk the walk.

“We try to walk the walk with the music,” he says,  “and what we do with the music in Black Arm Band is sort of leading by example.”

The show was actually commissioned by Australia’s Truth and Reconciliation hearings back in 2005 and given its unique title as a way of honouring the bond between indigenous peoples and the land.

Launched by Australian indigenous musical icon Ruby Hunter, dirtsong combines a small number of Australia’s indigenous languages (according to Leone, there are or were 350 different languages), together with Torrey Strait Islanders, in a musical and theatrical showcase that will share stories with Calgary audiences that might not sound so different from some of the stories we heard in Canadian productions like Making Treaty 7.

That’s because Australia’s indigenous history is as full of displacement, deception and a historical policy of official racism as Canada’s – and dirtsong is a community’s way of countering that political mendacity with a show that celebrates a culture that goes back 40,000 years.

That’s a significant aspect that indigenous novelist Alexis Wright, whose novel Carpentaria won the 2007 Miles Franklin Award – the Australian equivalent of the Giller or Governor-General Award (or Booker Prize), likes to point out: namely, that Australia’s indigenous stories started long before white people showed up.

“Carlos Fuentes said, ‘All times in Mexico are important and no time has ever been resolved,'” she said to reporter Stephen Moss in a 2008 interview in The Guardian. “That resonated with me because it’s the same in our story-world. We have these ancient stories that are part of who we are. The colonization story (of Australia) is not the whole story.” 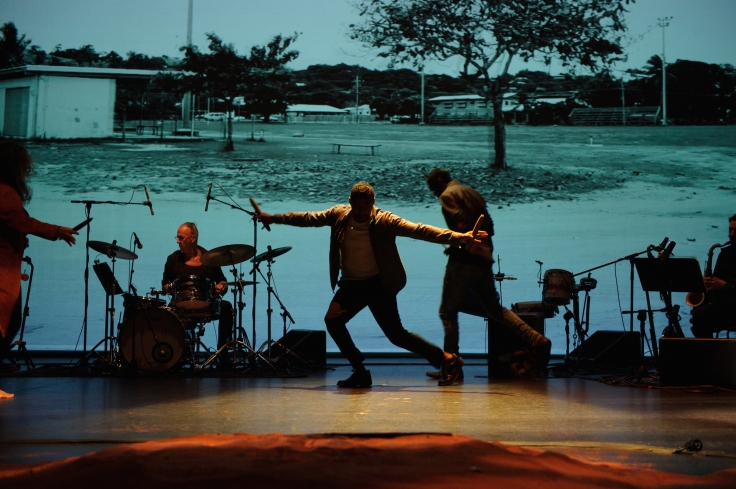 Language, and storytelling, lies at the roots of dirtsong, Leone says.

“The idea was to put language on the forefront,” he says. “they (Hunter and the original members of Black Arm Band) wanted to create a show that took some of these languages that were not extinct but dead – or close to being gone altogether – and people that speak them, or sing in them or write in them, bring them together and form a (musical) group.”

The group formed as a reaction to then-Prime Minister John Howard’s comment that aboriginal peoples needed to stop walking around “wearing a black armband”, or mourning their history in all its racist, violent, colonial detail.

“Since the inception (in 2005), another angle they’ve been coming at has been continual growth for emerging artists,” Leone says,  “to come through and tour around with the music – that’s where it all sort of started.”

It’s only one show, but what Leone has seen since he joined Black Arm Band is that dirtsong‘s songs and stories and films have had a healing impact.

“It just sort of jumps out and comes out just plays out in our everyday lives,” he says, “The connectedness those people have, to come onboard and help us express the indigenous voice to the rest of the world is something that’s the ultimate action that anybody could ever make towards reconciliation.

“They’re here with us,” he says, “walking together and helping us speak our truth and showing the beauty of our culture for what it is on a global scale to the rest of the world.”

It’s also a reminder that if you want to heal a nation, call some artists – and don’t cc any politicians on the email.

“Performing arts is so ahead what any politician could do,” Leone says. “It’s amazing. If you want to find out what’s happening in the world, or how good or how bad the world’s going, look to the arts.

Stephen Hunt is the 2017 High Performance Rodeo writer in residence