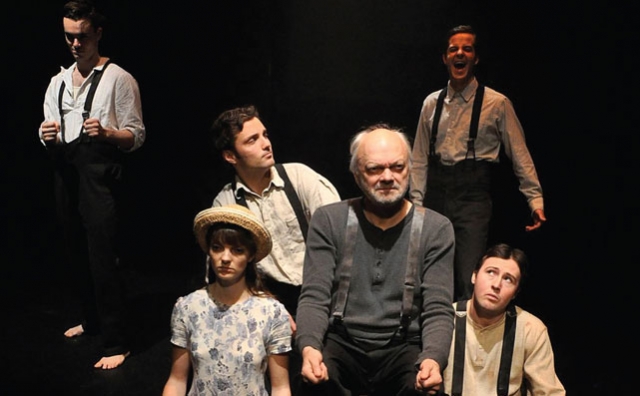 As I Lay Dying at the Pumphouse

Who would have thought a horse could fit on a stage at the Pumphouse?

Actually, the horse onstage in As I Lay Dying, Theatre Smith-Gilmour’s fine adaptation of William Faulkner’s classic novel, (which sadly closed Saturday night)  was a figment of everyone’s imagination  inside the Victor Mitchell Theatre Friday night – an audience of a couple hundred people,  in addition to the cast  – who performed the theatricalization of one of the great novels of the 20th century on a bare stage, prop-free, using almost nothing but their bodies and voices – and our imaginations – to tell their story.

But, years from now, I will swear they figured out a way to get a horse up there.

In particularly, Ben Muir, playing one of the Bundren clan, so immersed himself in the physicalization of his role that he sometimes seemed to be wrangling an invisible horse out in the barn, trying to prepare it for the long, weirdly funny journey that constitutes much of the plot of As I Lay Dying.

That’s a journey that the Bundrens take to keep a promise to Addie (Michele Smith), their family matriach, who has died, that they will return her body to Jefferson, where she asked to be buried.

Written in 1930, by William Faulkner in a stream-of-consciousness that skipped punctuation, As I Lay Dying features 15 different narrators, many of them various members of the Bundren family, all of whom take turns over the course of the show narrating the trip.

Theatre Smith-Gilmour  is a company steeped in physical theatre, and it was just this side of awesome and amazing to watch them, using nothing but the text from the novel and their bodies to tell a story that features – among other things – scenes crossing a raging river with the casket containing their dead mother,  a huge barn fire, setting a broken leg with concrete, and a young, pregnant 17-year-old daughter  Dewy Dell (Nina Gilmour) desperately wandering from drugstore to another throughout small town Mississipi, clutching a ten dollar bill, trying to find a pharmacist who will give her something to fix her situation.

The southern accents are a bit hit and miss, and you sit through early scenes sometimes asking, why? Why put all this energy and effort and sweat into telling this story, about this family and their nutty trip? Wouldn’t it be easier to get a Canada Council grant to adapt a Canadian novel? Wouldn’t it be more popular to adapt – I don’t know – The Life of Pi? It can’t be any more challenging to play an imaginary tiger sitting on a boat than it is to wrangle horses, can it? (I know, I know – copyrights, etc. )

But along the way back to bury Addie in Jefferson, As I Lay Dying draws you in to its lunatic world until you’re wholly absorbed in the misadventures of the Bundrens as they try to overcome the social awkwardness of transporting a reeking corpse across one of the steamier states in the nation.

A lot of its success is owed to Dean Gilmour, who plays four different parts, but mainly plays Anse, the father of the kids and husband of Addie, who insists upon fulfilling Addie’s dying wish no matter what havoc it wreaks upon the family – in no small part because he also needs some false teeth and aims to get some in Jefferson.

There’s something about Gilmour that looks permanently bemused, no matter what manner of horrors is being reported to him onstage. He plays a poor, uneducated man who only has two things going for him: persistence and belief. He has no money at all, and must rely upon the generosity of strangers to help his family out, as they travel the Mississipi back roads, with Addie (Michele Smith) getting heavier and more rancid by the hour.

The entire cast are terrific, physically transporting you into their world at the same time doing a fine job of narrating Faulkner’s text without it feeling too much like narrating someone else’s novel.

Nina Gilmour’s Dewy Dell is particularly effective, as a young uneducated girl trapped in a world she doesn’t quite understand – and Gilmour completely commits to her, and her limited self, in a way that’s heartbreaking.

By the end, when the family reaches a resolution of sorts that satisfies everyone, although one son has been vanquished, and another has lost the skin off his broken leg, and Dewy Dell undergone a trauma, you feel as if you’ve gone along on the ride too – and when Anse delivers one final joyful big reveal, followed by a final ecstatic tableaux that unfolds in super-slow motion, as if the family were an NFL team scoring a last-second touchdown that’s being reviewed frame-by-frame, it all comes clear.

As I Lay Dying is all about living – life in all its glorious, messy, details.

Sadly it’s completed its High Performance Rodeo run, but the company are headed west to Vancouver, to do an extended run as part of the PuSh Festival, between January 19-February 12.

Stephen Hunt is the 2017 High Performance Rodeo writer in residence.