Trumpet player Shaun Brodie wanted to transition from musician to journalist, but ran into a roadblock when journalism turned him down.

As a result, on his way to a discovering a more narrative form of storytelling, Brodie stopped at theatre and the Queer Songbook Orchestra was born.

That’s the name of the 11 piece orchestra featuring a collection of Toronto and Montreal – based musicians, along with a number of special Calgary guests, who will open the 2017 High Performance Rodeo Friday night at Max Bell Theatre with Songs of Resilience.

It’s a show that features unique arrangements of songs from queer artists together with stories, from ordinary folks, about the songs that helped them get through the challenging act of growing up gay.

(The orchestra is on a brief, chilly January mini-tour of Alberta: January 6 in Calgary, January 7 at The Needle Vinyl in Edmonton and at The Banff Centre, where they’ll spend a week in residence recording before performing at the Margaret Greenham Theatre January 14.)

Not a bad outcome for a j-school reject, acknowledges Brodie, who studied classical performance at the University of Victoria after growing up in Regina.

“That (rejection) essentially kick-started this whole thing,” he says. “About three or four years ago, I started to feel like…my time with the trumpet was maybe coming to an end.

“I had an interest in journalism,” he adds, “particularly radio documentary, that I wanted to pursue and so I got my (journalism school) application together, submitted it  – and then (a few months later), I got the letter and – yeah – I didn’t get into school.”

In the meantime,  however, Brodie had been hanging out at Videofag, a Kensington Market performance space/gallery in Toronto curated by Governor-General Award winning playwright Jordan Tannahill and his partner William Ellis.

“I would always go to events at Videofag,” Brodie says, “seeing all these great things, and I felt like I wanted to do something there by myself – but I didn’t have a project, didn’t have a queer project and I wasn’t just going to go up and play trumpet by myself, so I didn’t know what I was going to do.”

Eventually, Brodie – with Tannahill consulting him over several breakfasts – hatched the notion of a night performing orchestral arrangements of a kind of queer musical canon.

The songs would come from two different places:  one, as a way to highlight queer creators who existed under the radar of mainstream society and two, songs that spoke particularly vibrantly to LGBTQI people.

Exhibit A: someone like songwriter Billy Strayhorn, who, as a teenage prodigy, caught the eye and ear of Duke Ellington, eventually writing tunes such as Take the A Train and Lush Life.

“He’s a total inspiration,” says Brodie. “It’s kind of criminal how little known it is, but it makes sense, given the time he was living in, and the situation he found himself in, living with Ellington that it went that way.

“He had all the talent in the world,” he adds, “(but) he couldn’t have been a bandleader and been an openly gay black man in the 1930’s – but he could work behind the scenes with Ellington and be an openly gay man in the 30’s and 40’s, and that seems to be what he chose to do. And there was a bit of a price for choosing to do that too.

“He didn’t get very much recognition,” he adds. “Ellington controlled the publishing, so Ellington’s name would make its way onto Strayhorn’s compositions.

“Strayhorn was never paid directly,” he says, “direct royalties or anything – he just lived on the Ellington account.”

(One of Strayhorn’s songs is featured in Songs of Resilience, which is just the tip of a Strayhorn musical iceberg – the orchestra actually has another show devoted entirely to Strayhorn’s musical catalogue).

While the man behind that song has a fascinating backstory, at other times Brodie came to a song because of what it meant to someone who had nothing to do with its creation – like, for example, kd lang’s Constant Craving.

“When we started doing the project,” he says,  “I put the word out among friends, and whoever would listen, that we were trying to source people’s own stories of songs that they had a connection to, either when they were in the closet or in terms of their sexuality, and having those struggles – and if there’s any particular song that gave you some comfort or you found empowering in some way, and that’s why (we perform a few of) the ones that came back to us. 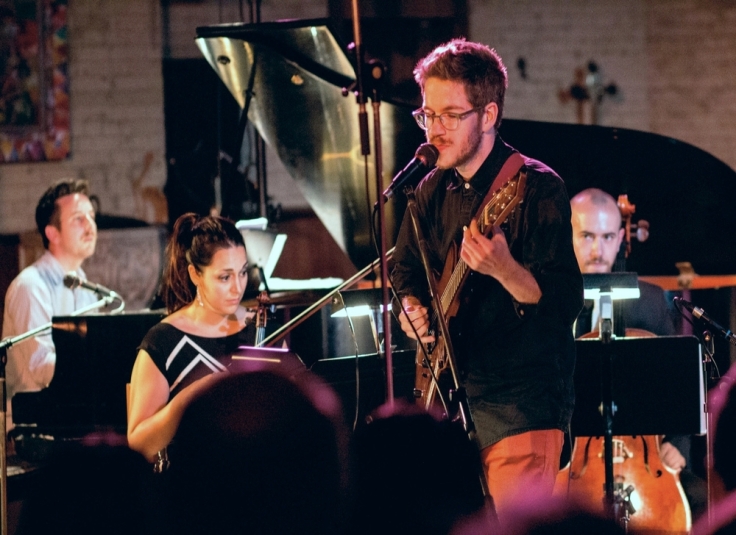 “(It came from) a guy’s story about growing up in Newfoundland, in small town Gander,” he says, “and not really having any sort of context to anything gay – as you can imagine – in Gander in the early 90’s.

“But (then),” he says, “that song came out. (Then), kd lang came out – and she was connected to this queer identity, which he really latched onto.”

“And (then) he latched onto that song,” he adds,  “so it really held a special place for him.”

“When we travel outside Toronto,” he says, “we like to recruit from the local community to be the narrators that we work with. It’s nice to draw from the community that we’re going to, and have people come on board to be involved, rather than just sort of travel with a show that we have all sort of sealed up and then we present it. We like to bring people in and have them be part of it – and for Calgary, they see their own community reflected onstage.”