When the truth starts to hurt, The Christians truly takes flight

at Rosebud Theatre through Oct 23

At first blush, there’s something a little audacious about the storytelling in The Christians, Lucas Hnath’s moving drama about the fallout that occurs when a celebrity pastor blurts out an inconvenient truth.

That’s because the entirety of The Christians unfolds, literally on a stage – the pulpit of a mega-church in an unnamed city, where Pastor Paul (David Snider) delivers his weekly sermon, to a passionate, growing flock of followers.

In fact, on this particular Sunday, Pastor Paul’s sermon is dedicated to breaking some good (fiscal) news about the church, which Snider delivers with all the gusto and ebullience one might expect, as a trio of worship team members (Cassandra Garbutt, Caitlyn O’Connor and Stephanie Lanting), wife Elizabeth (Heather Pattengale) and his associate pastor Joshua (Jordan Cutbill) all look on admiringly from the stage, lending an air of airbrushed, manufactured uplift that feels kind of – well, stage-managed. 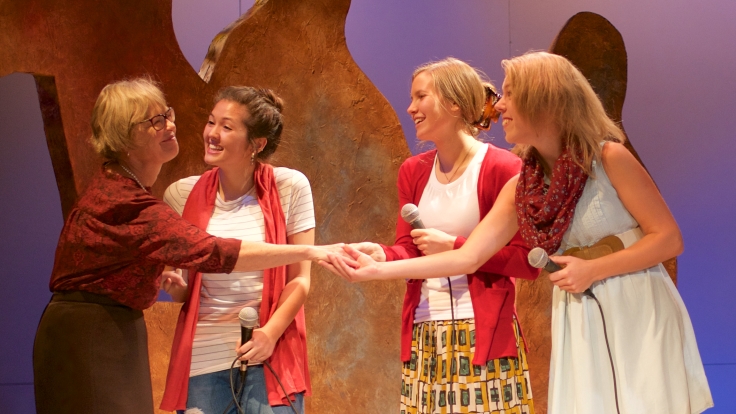 But that’s all part of playwright Hnath’s point, I suspect, which is that what is a Sunday sermon, but an elaborate piece of stagecraft?

It’s spirituality delivered with production values, in an aspirational setting, starring a messenger who combines charisma with moral heft that combines to produce – well, on this particular Sunday, what it produces is a mortgage-free mega-church.

That’s when Pastor Paul decides,  on this Sunday unlike any other, to go off-message. In front of his cohorts and adoring audience, he diverts from the church liturgy, delivering a message that leaves everyone somewhat flabbergasted at first, followed, as events unfold, by anger and even rage.

What follows, in a 90 minute long one act that unfolds in the same location, spread out over over a period of several years – you have to suspend a little disbelief –  is the reversal of Pastor Paul’s fortune, as one by one, his flock, his family and finally, his board of directors, all turn their backs on him.

With The Christians, playwright Hnath takes a chance – he bets that it’s possible to theatricalize an idea, that it’s enough for an audience to eavesdrop on a group of people with two passionately contrasting versions of reality, and that out of that can come an emotional catharsis or resolution of some kind.

It’s kind of an old-fashioned notion, one you might not think could hold up in our digitized, 21st century, globalized world – and then Donald Trump happened.

Suddenly, our world features a daily dose of two competing versions of reality – and as a result, The Christians couldn’t feel more timely.

You could feel it in the performances that Rosebud’s stellar cast delivered on Friday’s opening night. Snider manages to catch Pastor Paul’s growing megalomania and weaves that into his startling break with the conventional wisdom that results in his isolation from everything – and everyone – dear to him.  Snider – in a role that’s equal parts euphoric, searching, and ultimately humbling – makes it all seem to fit within the normal arc of one man’s lifelong spiritual search.

The thing about Pastor Paul is that he believes what he says, even as he is equally aware that what he believes is going to take him down. Snider never wavers in his commitment to Pastor Paul’s spiritual turnabout, even as the emotional shrapnel starts to fly at him from every side, and it’s that remarkable emotional resilience that causes The Christians to ramp it up as it unfolds, and everything begins to crumble for Pastor Paul.

There’s a subplot as well, involving the associate pastor, Joshua a young, charismatic man who Paul saved, who has grown into the emotional center of the superchurch that Paul once demonstrated, but has long since grown distant from.

Cutbill does an excellent job of capturing Joshua’s dilemma, as he is forced out by the man he looks upon as a father figure who once upon a time gave him his life back.

Pattengale’s Elizabeth is a restrained and thoughtful woman whose world falls apart as she slowly begins to realize that the man she thought was her soulmate transforms in front of her eyes into someone she no longer recognizes or understands. It’s an understated, restrained performance that sticks to your ribs afterward.

That’s a sentiment echoed by Elder Jay (Judith Buchan) at one end of the mega-church spectrum, and by Worship team member Jenny (O’Connor), a single mom who beautifully drives home the individual consequences of Pastor Paul’s reversal.

The set, by Carol Rapanos, is spacious and simple. It successfully captures that mega-church glossy magazine feeling that makes the whole churchgoing experience feel a little more televised and a little less internalized.

Whether you view The Christians through the lens of a Biblical allegory, or a political one – or a personal one, Rosebud’s production demonstrates that Hnath’s unique theatrical bet pays off in a production that’s equal parts thoughtful and moving.

Stephen Hunt is the 2017 Rosebud Writer-in-Residence

One thought on “When the truth starts to hurt, The Christians truly takes flight”