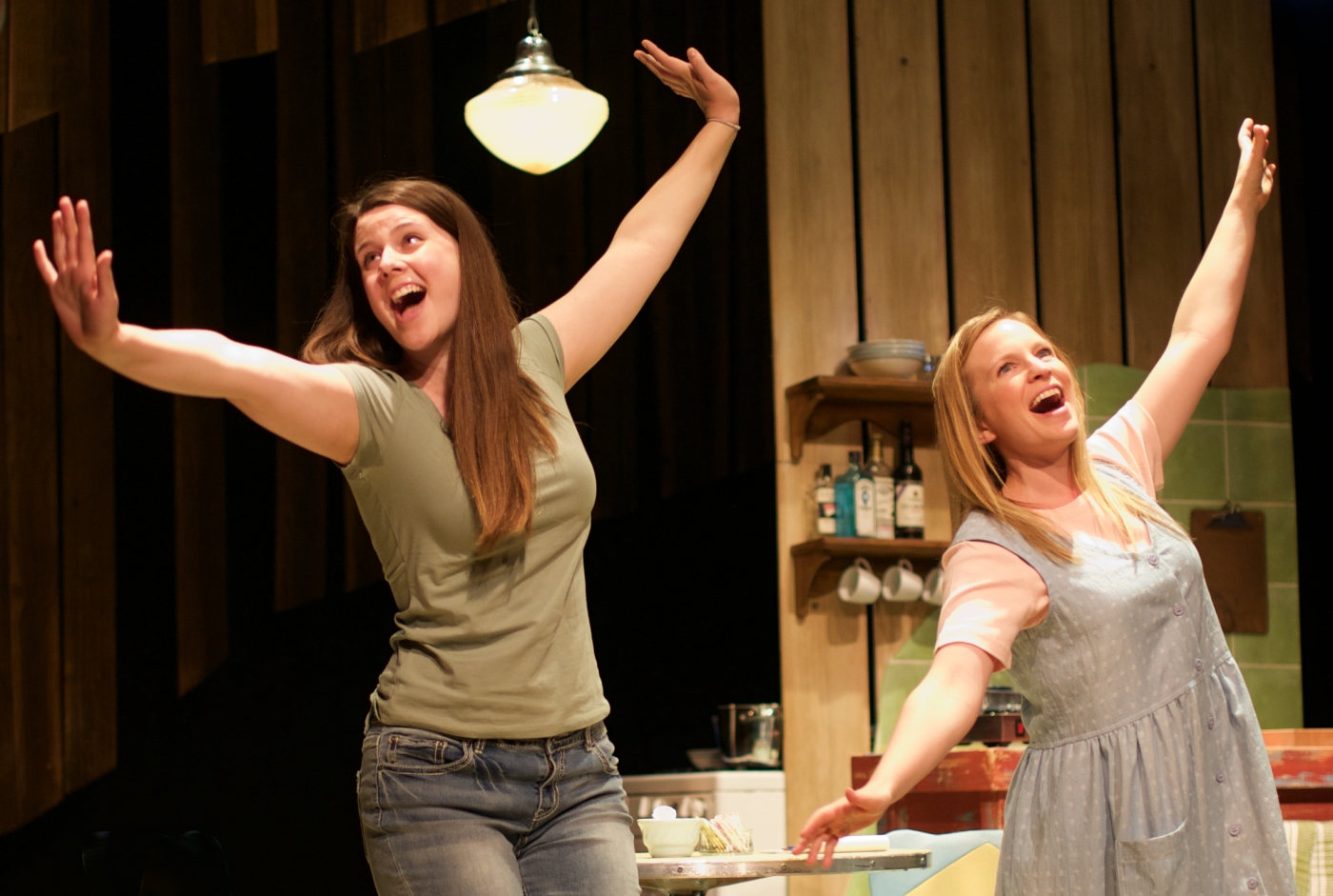 The Spitfire Grill through September 2

Some shows just fit their theatrical home so perfectly, you marvel that they ever played anywhere else.

That’s certainly the case with The Spitfire Grill, Rosebud’s sweetly-sung, heart-warming summer musical, which feels about as home on the stage of the Rosebud Opera House as a hungry-looking bearded guy playing a musical instrument. (In this case, it’s Nathan Schmidt and a violin, but you get the picture!)

What surprises me about Spitfire, which tells the story of a small, unlicked cub of a diner stuck somewhere in the Wisconsin backwoods and the efforts of its long-suffering owner-operator, Hannah (a wonderfully cranky Elinor Holt) to sell the place, is that long before it ever reached Rosebud, it was a 1996 sleeper indie film hit starring Oscar-winner Ellen Burstyn and then a Pulitzer Prize-nominated 2001 Broadway musical.

It’s a Broadway musical if Gordon Lightfoot ever sat down and wrote one, drenched in folksy, country-infused melodies filled with the drop down menu of country music emotions – you know, loss, longing, lonliness, and isolation and mid-American melancholy – but in a good, solid, strapping, narrative-driven sort of way, all of it directed with country charm and a bit of city verve by Rosebud artistic director Morris Ertman.

That’s because the show’s creators, James Valcq and Fred Alley, adapting from the film by Lee David Zlotoff, have concocted a book and lyrics that might be rooted in backwoods Americana, but is also driven by characters who want something more out of their lives, and are looking for a way to get it – whether it’s emotional relief, economic opportunity or a chance to start over again after a bad decision.

The narrative catalyst for it all is Hannah, who decides, after 20 years of looking for just the right kind of buyer, to hand the Grill over via a contest, where anyone with $100 and a heartfelt yarn can win a shot at taking over as the new, less cranky Hannah.

Hannah also carries an emotional burden throughout her long days running the Grill, namely the fate of her son Eli, who walked out one day and never returned. The fallout on the family from that is that little nephew Caleb (Paul Muir), is the perpetually disappointing relative who can never live up to the idealized Eli that Hannah has built up in her memory.  That hurt produces a sizzling number from Muir called Digging Stone, where his rage and frustration transform into a song that feels like a cry from deep inside his soul.

Hannah is assisted in her scheme by a pair of young sidekicks,  newcomer Percy (Alixandra Cowman) and Shelby (Cassia Schmidt), both of whom grow into their role as the keepers of the Spitfire spirit – even when it’s revealed that Percy has a past that includes a stint in prison.

Holt has always been one of Calgary’s shining lights, and her work in Spitfire is some of her strongest in years. She’s not afraid to snap off a harsh remark at the help, or to say something she probably ought not to to fragile Caleb, the way you do when you don’t have enough sleep or money or love in your life and the hurt and anxiety of all that leaks out in the wrong words delivered to an unsuspecting victim.

There’s also a romantic subplot involving Sheriff Joe Sutter (Travis Friesen), and Percy, which ought to go smoother than it does – he’s the sheriff, and tall, and a pretty nice guy to boot – but only brings out the barbed edges in Percy, who describes herself  in one scene to Joe as a wild bird (who won’t come home to a nest?). It’s a nice bit of poetry slipped into an everyday exchange between two humble and wounded characters – and a fine example of the sort of rootedness that makes The Spitfire Grill a pure prairie pleasure to watch, and listen to.

There’s a mystical subplot surrounding the disappearance of Eli, and some fun as well, particularly in the song Shoot the Moon at the end of Act one, when Holt and the company transform the Rosebud Opera House into one big, Nova Scotia kitchen party.

It might be set in Wisconsin, but the sense of isolation that permeates The Spitfire Grill is something recognizable to every single person who ever grew up on the prairies, listening to the wind blow at night for entertainment. More than the wind blows through The Spitfire Grill – it’s a low-key, lyrical charmer about a gathering place for a few lonely souls, who come together to heal and sing a few beautiful songs in the process, that will have you humming them all the way home.

Stephen Hunt is the Rosebud Theatre 2017 writer in residence