Walk This Way: Portraits in Motion 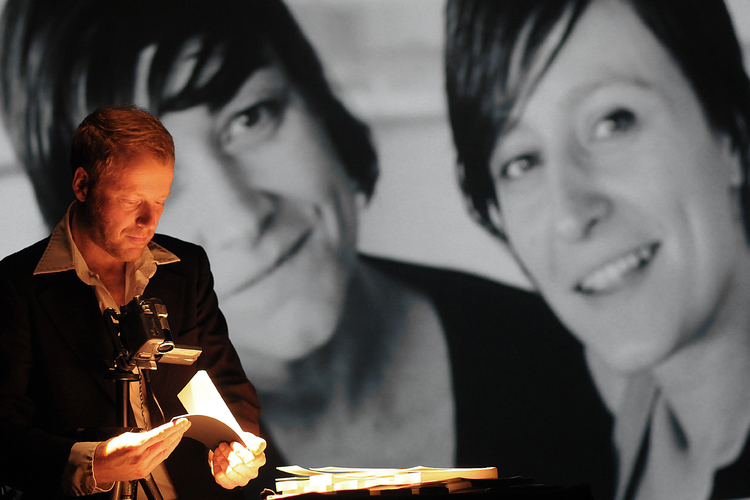 Portraits in Motion at the Theatre Junction Grand through January 21

If transportation was a device, nothing could be more lo-fi than going for a walk.

Volker Gerling discovered that going lo-fi also opened up his world in a way he never could have imagined.

The witty German multi-media artist – I don’t know whether to call him a filmmaker, actor, monologist, or odd duck – discovered the joys of walking years ago, when – as a recent film school graduate living in Berlin, who created flipbooks out of rapid-fire photos he shot of various subjects – he decided he wanted to do some travelling.

Gerling was too broke to climb a plane, a train or an automobile to go on a great journey, so instead, he laced up his walking shoes, packed a tent and six flipbooks to show people what he was up, and set out on foot  – with no money whatsoever.

That was the start of a series of walking journeys that have covered over 3500 km of Germany over the past several years, which produced not only a bunch of wonderfully engaging new flipbooks, but so many terrific road trip stories Gerling turned the whole damn thing into Portraits in Motion, which is part of the 2017 High Performance Rodeo. 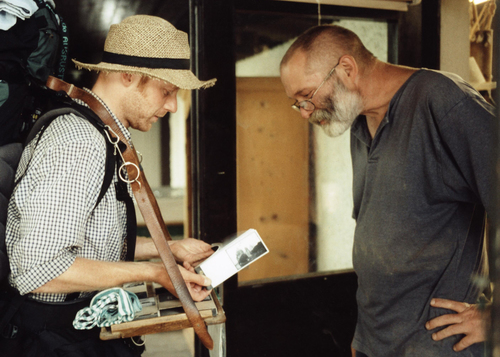 It’s not much more than Gerling, armed with a pile of flipbooks and an old-fashioned overhead projector that everyone’s teacher in Grade 6 used to use to teach geography with, standing off to the side of a screen that shows closeups of the photos in his various flipbooks, as he flips – and repeats – while telling the story of whoever appears in that particular flipbook.

Instead, Portraits in Motion is kind of the story of reconnection – with each other.

It unfolds slowly. It occasionally veers into weirdly funny exhibitionism, such as when a woman Gerling photographs sitting at a bar peels off her shirt, randomly flashing him, but mostly it’s far more nuanced than that.

It’s more like the theatrical equivalent of having a great cup of tea with someone you didn’t really know, and then, after sitting down a while, you depart feeling a little closer.

There are also odd digressions, such as the flipbook Gerling creates out of shooting the way men position themselves at the urinals of a German theatre festival or witnessing the end of the 20th century in a small Polish town on New Year’s Eve, 1999.

Part of the excellent charm of Portraits in Motion are the flipbooks, and part is Gerling himself.

He’s a charming, open, funny guy whose main preoccupation seems to be finding ways to connect with strangers, because in his world, a stranger is just a friend you haven’t met yet.

That might have seemed simple – even banal – the first time he laced up those walking shoes all those years ago, but Portraits in Motion (which won the 2015 Total Theatre Award at the Edinborough Fringe) shows up in Calgary just as the world seems to be saying and thinking and voting for ideas that reflect the complete opposite idea.

All I can say is – to paraphrase an old cigarette ad from back in the days when the overhead projector was all the rage – I’d walk a mile to watch Portraits in Motion.

Stephen Hunt is the 2017 High Performance Rodeo writer in residence