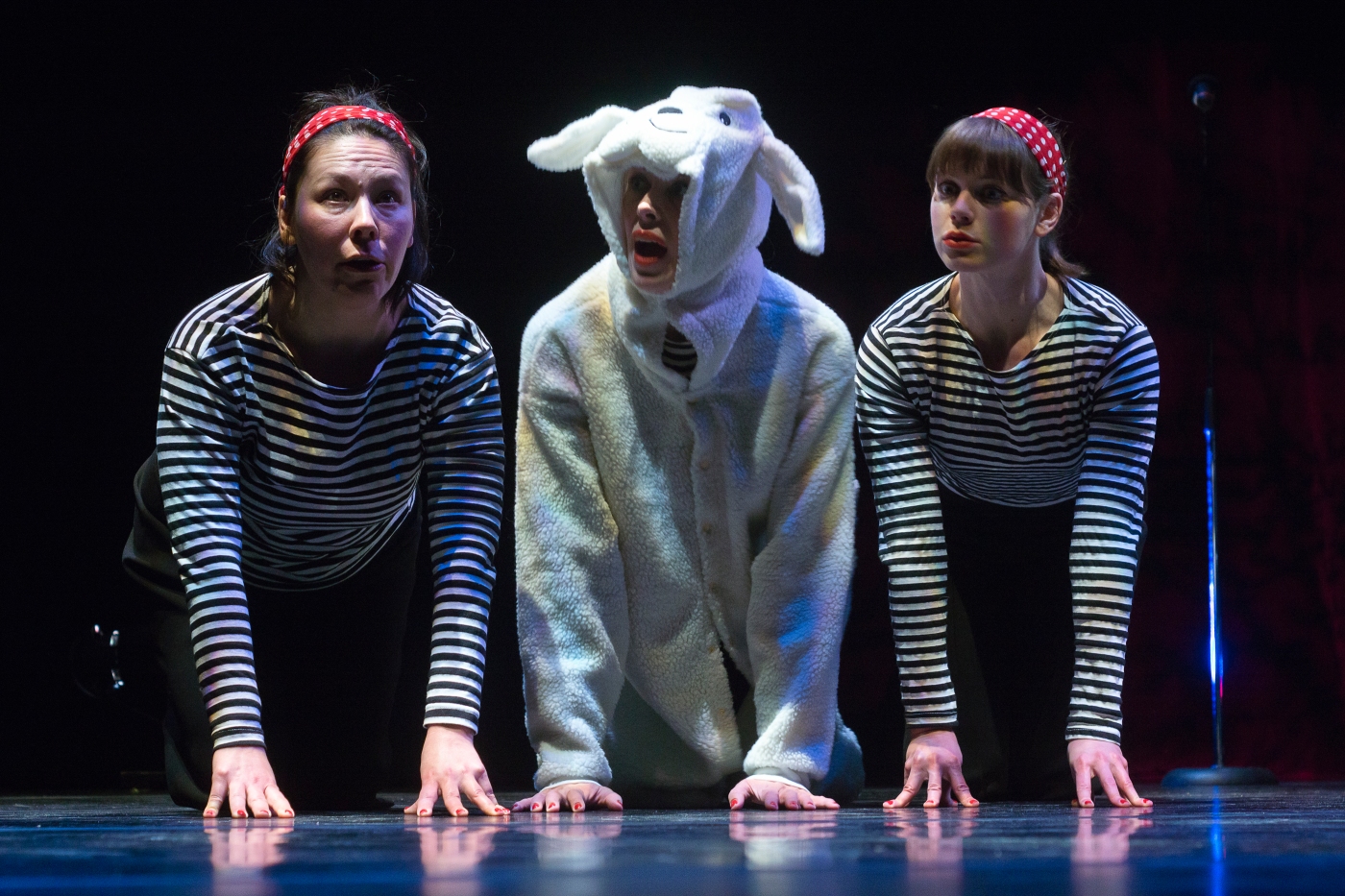 All the Little Animals I Have Eaten

About three-quarters of the way through All the Little Animals I Have Eaten, Karen Hines’ gloriously funny new play, Frankie (an excellent Ellen Close) stands upstage, rambling after a hell night at the upscale restaurant she works at in order to put herself through graduate school, where she’s studying feminism (the fifth wave).

Her server shift – over which the course of the play unfolds – is a hallucinatory riff that’s a meditation on popular culture, localtarianism, real estate lust – and suicide. Despite Frankie’s best efforts to just serve drinks and narrate all the adjectives the night’s menu demands of her, she is haunted by a trio of alternate versions of herself (played by Denise Clarke, Georgina Beaty and Nadien Chu), who occasionally, when necessary, transform into a kind of depressed female literary genius Mount Rushmore: Virginia Woolf, Anne Sexton and Sylvia Plath. 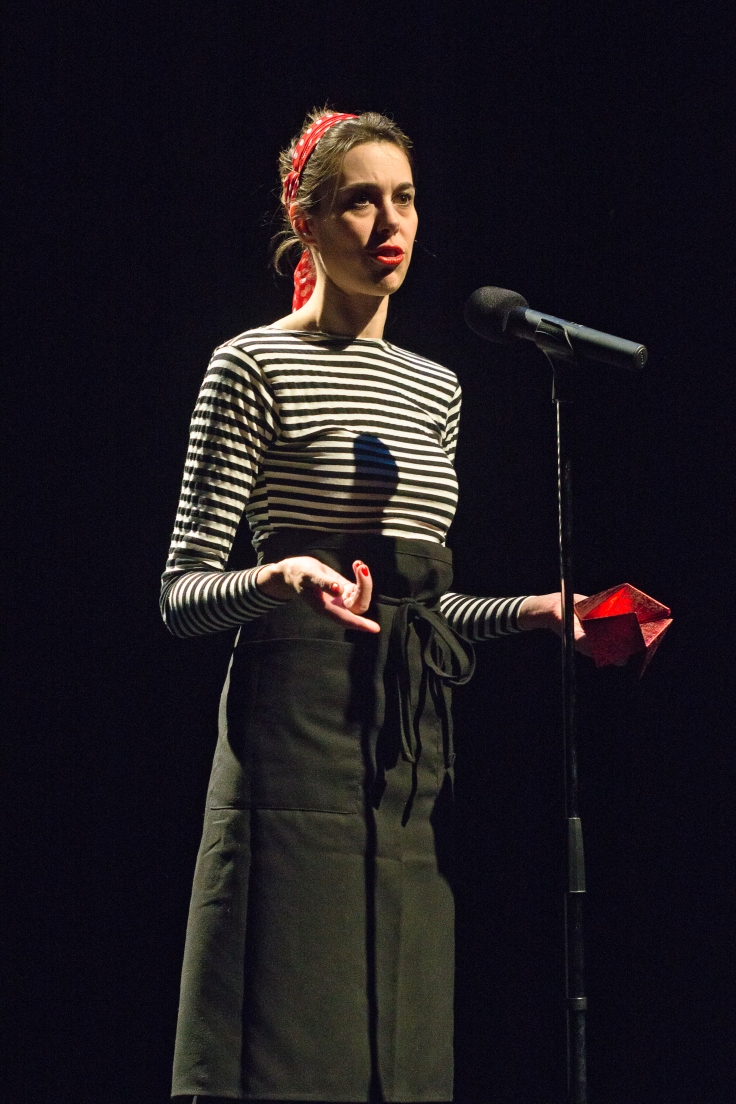 (Ellen Close, as Frankie,  in All the Little Animals I Have Eaten, at the 2017 High Performance Rodeo)

“My thesis is all concept,” says Frankie, staring, deadpan, out at the audience, and you can almost hear playwright Hines mouthing the same line about her cerebral, surreal and frequently hilarious – and dark – new play (which was also simultaneously published Thursday, along with her other new play, Crawlspace).

All the Little Animals actually is – mostly for better, but sometimes not – all concept. It’s a theatrical talkback to the Bechdel-Wallace Test, a pair of studies that examined how many times women in Hollywood films had scenes with other women where they spent more than a minute of screen time and didn’t talk about men. And their characters has names.

According to Frankie, or one of the other alternate versions of her played by the other three actresses, that amounted to about 17% of all roles – a pitifully small number. (What’s even sadder is when you contrast that to the number of wonderfully-written women’s roles in 1930’s films by directors like Preston Sturges, Howard Hawks and others).

The task, for Hines, in All the Little Animals, is to create a number of scenes that pass the Bechdel-Wallace test.

There’s no getting around the fact that that’s a concept, not a story.

Hines’ answer to that dilemma – you can’t stage a thesis, can you? –  is, with the help of some deft direction by Blake Brooker –  to construct a play around Frankie’s shift at her restaurant, with a subtext around the possibility that she might choose to follow in the footsteps of her literary heroes and kill herself.

Or something like that. It’s alluded to, but not ever really suggested that she actually would.

Hines is a spectacularly talented writer. She is a funny, smart, self-aware blend of a great mind, blended in with an academic’s emotional detachment and a depressive’s obsessiveness – all of it delivered in a stem-winding script that doesn’t so much hang off the architecture of her flimsy plot as it knocks it down, where it crumbles into little, plotless pieces, all over the stage.

What we’re left with is an array of comic riffs, some of them equally disturbing as they are hilarious.

If All the Little Animals is all concept, it’s concept of the highest calibre.

Close does the heavy lifting as Frankie, and she’s excellent. She’s a cerebral actress, kind of reserved and literary, and she has a great talent for delivering Hines’ stem winding, frequently hilarious digressive narrations about life, as she flits between tables serving drinks and hovering between being a woman on the verge of a nervous breakdown and getting an A for her thesis, a graphic comic of the most unconventional kind.

What saves Hines’ theatrical bacon at various points in the somewhat existentially plotted Little Animals is the comic bravado of Denise Clarke, who plays an assortment of characters – condo owner Bella (from Texas), who likes to swill wine at happy hour with her housekeeper in the rooftop bar of their sustainable condo; poet Anne Sexton, an outtake from an earlier show by One Yellow Rabbit; and a writer (it might have been Bella, I’m not quite sure), who steals material from her hopelessly sincere BFF, transforms it, and becomes rich and famous in the process.

Clarke has always been willing to take anything farther onstage than almost anyone might expect her to, and her grand diva stylizing is a perfect match for Hines’ exquisitely neurotic comic arias – it’s kind of like watching a 21st century, feminist version of the British comic classic Withnail & I, with Clarke playing the part of Richard E. Grant, who delivered one of most delicious comedy performances ever in that one.

At the same time, there’s a dark undertow percolating through every comma and every ironic aside and every morbidly funny bit of narration that Close delivers throughout, aided capably by Beaty, and Chu and Clarke.

That’s depression – or, as Holly Golightly (Audrey Hepburn) used to say in Breakfast at Tiffany’s, ‘calling them the blues doesn’t quite describe it. More like the mean reds.’

There’s depression that women experience in a world that doesn’t value them properly, or respect them, or allow them to eat sandwiches with their soup, or to grow old – or, to tell you the truth, to be depressed.

If there’s a single throughline of a story arc through All the Little Animals, as we watch and listen to Frankie trying to mitigate the ongoing battle between the demons in her head and the demons demanding service in her section of the hideously trendy restaurant, it’s our collective desire for her to cheer up. 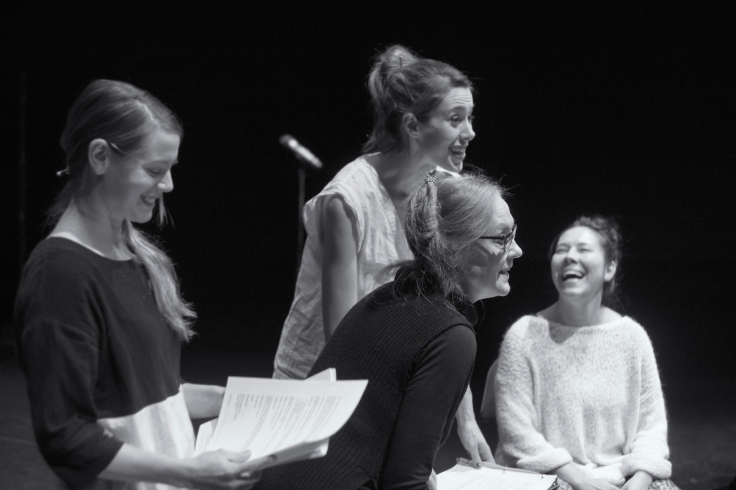 I think even the ghosts of all the dead literary legends who form a kind of depressive chorus were rooting for her to cheer up, to take that depression and stick it in a drawer and get on with it – get that master’s degree! Pay off those student loans! Stay calm and carry on!

The flip side of depression – I think – is anger – and there’s an undercurrent of anger that runs hot right underneath all the funny stuff in All the Little Animals. And why not be angry? There’s a hell of a lot of crazy taking place right now. The world appears to have lost its mind, and the movies are right there enabling it all, making one brain-dead $175 million superhero blockbuster after another.

Theatre – despite what Clarke’s commercial blockbuster writing character sneers at her pal over drinks – is a perfect place to fight back and wage a guerilla culture sneak attack against dumb, misogynistic blockbuster-sized, testosterone-fuelled storytelling.

All the Little Animals I’ve Eaten feels too long  – probably 20 minutes – but by the time it winds down to the end of Frankie’s shift, and she stands there describing how she’s too tired (and ethically compromised) to eat her lamb chop even though she’s dead starving, there’s little doubt that Frankie’s long day’s journey into a night shift is a lot more than a concept.